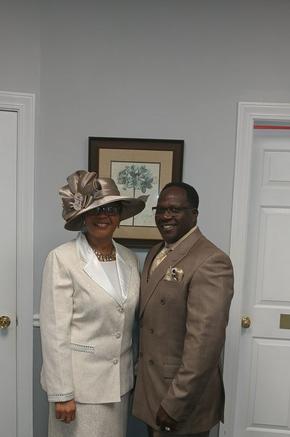 Michael Fullard was born in Lee County where he attended the public school and is a 1980 graduate of the Mt. Pleasant High School. Rev. Fullard received his theology education at Morris College in Sumter, South Carolina. While attending Morris College, he was awarded the Certificate of Achievement for the South Carolina Baptist of Congress Christian Education; he was the recipient of the Mount Moriah Baptist Church Scholarship, and the recipient of the Arthur Vining Davis Foundation Scholarship. He received an Associates of Theology Degree from the Christian Life School of Theology (CLST) located in Columbus, Georgia.

Rev. Fullard was awarded the ROTC Advanced Camp Certificate of Achievement for Meritorious Performance. He attended the Florida National Guard Military Academy Non-Commissioned Officer's School and graduated with a diploma in infantry. He also received the United States Army Meritorious Service Medal. Rev. Fullard is a retired Master Sergeant of the 108th Army Reserve Unit at Fort Jackson, South Carolina where he also served as the Logistic Section Leader of the 7th Brigade.

Rev. Fullard is a retired Captain from the South Carolina Department of Corrections. During his tenure, he was a member of the State Employee Association; Correctional Peace Officer Foundation; the South Carolina Law Enforcement Association; a former member of the Rapid Response Team; Emergency Preparedness Instructor to include; prison riots, hostages, disturbances, and escapes; Certified Weapons Instructor; and Department of Public Safety - Criminal Justice Academy-Certified Defensive Tactic Instructor. Additionally, he received the Approved Medication Technician Certification Course from the Department of Disability and Special Needs (DDSN). Other memberships include the Riven Rock Masonic Lodge #60, a member of the NAACP - Columbia Branch, and he also serves as a Notary Public for South Carolina.

Rev. Fullard is married to Gloria Grant of Columbia, South Carolina. They have one son, Sean Michael; two daughters, Melonnie Catrice and Alaina Michelle; and one granddaughter, Tikerriah.

Rev. Fullard is a firm believer of God's word to include his faith scripture: Philippians 4:13, "I can do all things through Christ Jesus which strengthens me."